With railroad concessions that connect Brazil’s traditional agricultural and industrial production hubs to its main ports, we have a growth strategy that is based on its competitive advantages and investment plans, as well as the logistic challenges facing Brazil. The core objective of the business is audacious: substantially increase the railroad transportation capacity of the business in the next ten years.

This plan is in consonance with the need to free up the country’s logistic bottlenecks. Railroads, which correspond to no more than 20% of Brazil’s transportation system, according to data from the National Transport Confederation (CNT), are capable of increasing the competitiveness of domestic industry and boosting the company’s business. Increasing the use of railroads will also improve the alternatives for shipping the produce from agribusiness, which accounts for 30% of Brazil’s Gross Domestic Product (GDP) and 37% of the jobs in Brazil, according to the National Supply Company (Conab).

Rumo strive to ensure the perpetuity of its business, combine its intermodal logistics projects with railroad transportation, and establish long-term relationships with its clients. The basic principles that guide our vision of the future for the business are:

Focus Growth Where We Have a Distinct Competitive Advantage

Our objective is to serve the railroad and intermodal corridors that increase its market share among clients who historically use trucks as their main mode of transport in Brazil. Thus, it is possible to demonstrate the advantages of railroad transport over road transport in segments such as industrial products.

Maintain Strict Cost Controls as Our Volume and Revenues Grow

Our commitment to business perpetuity is based on disciplined execution, with the focus on low costs and on volume and revenue growth. Our priorities include control over fuel consumption and supplier management.

To honor our commitments to clients

Trust of clients is one of the most important factors for driving business results and for establishing long-term business relations. Among the current priorities are entering into partnerships to expand our logistics infrastructure.

Our strategy is to minimize equipment downtime by maximizing the utilization of the equipment we own through the use of various asset utilization programs that monitor equipment location and transit timing within our rail network, as well as investing to eliminate any bottlenecks, and tailoring our acquisitions of new equipment to demand through ongoing analysis of fleet levels versus projected backlog.

To achieve this goals Rumo projects investments of approximately BRL 9 billion from 2016 to 2020, focused on the long-term and clear purpose of reducing operating costs and increasing the organization’s capacity, efficiency, and service level.

In response to the decrease in the average speed of railroads recorded in recent years, which has generated official notifications by the National Land Transport Agency (ANTT) and client complaints, a significant part of the resources (between 40% and 60%) will be invested to recover the network and expansion and construction of new rail yards, in order to improve access to strategic ports such as Santos (SP), Paranaguá (PR), São Francisco do Sul (SC), and Rio Grande (RS).

Another significant part of the investments plan (from 30% to 40%) will be geared towards replacing and renovating locomotives and railcars. One of the focuses is to expand the fleet of 100 ton closed hoppers8, railcars increasing the flow capacity and obtaining gains in transported volume, trains average speed, and agility in the access to the ports of Santos (SP) and Paranaguá (PR). 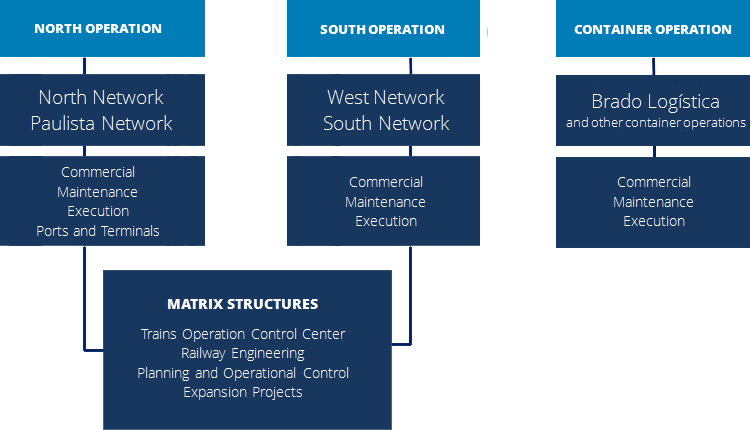 Northern Operations comprise the concessions held by our subsidiaries Malha Norte and Malha Paulista. Moreover, Rumo has important transshipment terminals in the states of Mato Grosso and São Paulo, in addition to the T16 and T19 port terminals, which Rumo fully owns, and certain other terminals in which the Comoany holds equity interests together with strategic partners, namely Terminal XXXIX (49.6%), Terminal Marítimo do Guarujá S.A. – TERMAG (19.9%) and Terminal de Granéis do Guarujá S.A. – TGG (9.9%).

Through Northern Operations, Rumo primarily transports agricultural commodities such as grains (soybean, soybean meal and corn), sugar, rice, wheat and fertilizers. Rumo also transports industrial products such as fuels, paper and pulp. The network that comprises Northern Operations extends over a large part of the agricultural production areas of Brazil located in the states of Mato Grosso and São Paulo, and is consequently the most important operation of the Company, accounting for approximately 71% of Rumo’s rail transportation volume in 2019.

Northern Operations’ main customers in the rail transportation segment are grain traders, including Bunge, Amaggi, Cargill, ADM and Louis Dreyfus, among others.

Southern Operations primarily transport agricultural commodities such as grains (soybean, soybean meal and corn), sugar, rice, wheat and fertilizers, as well as certain industrial products such as fuels, and pulp and paper. The main customers in this segment include Santa Terezinha and Bunge.

The Container Operation comprises the operations of Brado Logística, in which Rumo holds a 61.71% stake. In the Operation of Containers, the Company transports agricultural products as well as industrial products.